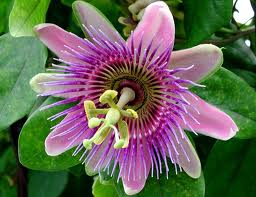 The story of the Passion Flower

The Passion flower has had a long and notable link with romance and religion throughout time. Its scientific name is Passiflora but it is well recognised under the names passion vines or passion flower. Well known for the juicy edible fruits that they produce passion flowers often need a large pollinator to keep it alive, most notably large bees, bats or hummingbirds. The fruits often tend to be oval or round and there are over 500 species worldwide, most being vines however there are a few shrub families of the passion flower.

The passion flower family pollinate all over the world except for Antarctica. They don’t survive in Antarctica because of the harsh weather conditions. Nine species of the passion flower belong to the USA, other species grow in places such as, South America, Southern Asia, China, Australia and one species currently grows in New Zealand. As well as other species on this planet new families of the passion flower continue to be discovered by scientists with Xishuangbannaensis and Pardifolia being found in 2005 and 2006 respectively. Scientists have introduced members of the passion flower family to new parts of the globe for example the Blue Passion Flower grows wild in Spain and the Purple Passionfruit and its relative the yellow Flavicarpa have been introduced to tropical paradises as commercial crops.

In America bee keepers build wooden beams in the direction of passion flowers in the hope to get carpenter bees to create a hive there and if this is the case the bees will then pollinate the flowers and keep it alive. The sword-billed hummingbird has co-evolved with certain types of passion flowers so that they can feed off and pollinate the flower at the same time.

To stop butterflies laying too many eggs on the flowers leaves the flower has evolved to produce little nubs on each leaf to fool the butterfly with how many eggs have actually been laid. As well as this passion flowers release nutrient liquids from their glands. This liquid then attracts nearby ants who come and then feed on insects that are threatening the flower.

In Victorian times the flower was very popular and hybrid were created using the Wing stemmed passion flower and the Blue passion flower. Many species of the flower which grow in hot climates can also be grown in cooler Mediterranean countries.

Native Americans used to take fresh, dry leaves from the flower and cook them in a stew. Once cooked a person would drink the stew and this is said to treat insomnia, hysteria and epilepsy. The European colonists continued with this medication when they landed on American shores. Once dried the leaves can also be smoked but no-one knows the definite side effects of doing this.

Why send fresh flowers for every occasion?

When you think about the perfect gift for every occasion, beautiful blooms most certainly come to mind. If you are still wondering, why send fresh flowers? The answer is simple really. A beautiful bouquet has a wonderful way of instantly making somebody smile. It’s joyful effect will last as long as the blooms stay fresh […]

Of all the colours available, when it comes to fresh flowers, red is one of the most popular of all. Many different types of flowers are available in red and some of them are perfect for bouquets while others are best for gardens or balconies. If you are trying to choose red flowers for yourself […]

We all love the idea of surprising our partners with a beautiful arrangement on Valentine’s Day. We want to keep it all a secret until the big reveal on the and, as grand as this sounds, not everyone knows how to really pull it off! After placing your flower order and collecting or receiving the […]