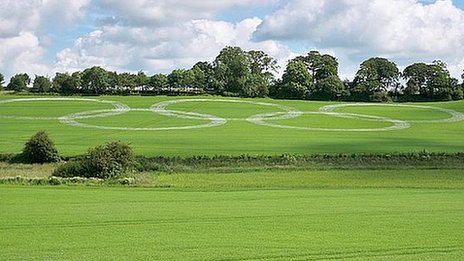 Giant Olympic flower rings have begun to appear in a field in Bath in Somerset. Gerald Addicott, from Corston Fields Farm near Bath, planted the giant rings seeds in a field back March “just for fun”.

Now the rings have begun to flower and each ring has now reached 55 metres in diameter and the logo is a massive 196 metres wide.

Mr Addicott was available for interview and said, “It’s amazing what you can do with five sticks and a bit of string.”

The rings can be seen when driving down the A39 between Corston and Marksbury, the white flowers are well ahead of the blue in terms of blooming and the flower rings are easily visible.

Mr Addicott added, “It’s changing by the minute and when the white linseed runs out of steam, then it will be green rings on a blue background. But linseed flowers are illusive, they bloom for a few hours each day and for a few weeks in June. Exactly when the crop blooms during the day and how long that display will last can’t be predicted”.

Mr Addicott was born in 1948, which is the year the last time the Olympics were held in London and celebrates his birthday on the same day as the opening ceremony of the London 2012 Olympics.

Mr Addicott finished his interview by saying, “This year, they open on my birthday and I thought it would be quite a nice idea to make something on the farm that we all would remember. And if somebody drives past and looks up and sees these rings and smiles then it’s job done I think”.

When we think of sunflowers, we usually have but one image in mind. What many people do not realise is the fact that there are several varieties available and each one is unique if you understand their main differences. Here are some of the most interesting and popular varieties. Skyscrapers As the name suggests, these […]

Candy canes are bright, colourful, and associated with Christmas of course. We use them to decorate our Christmas trees, wreaths, and even in centrepieces. If you want to give your holiday centrepiece that extra festive touch, you can make your own candy cane vase. You need: Cylindrical vase (same height as your candy canes) Candy […]

The most beautiful white blooms

While we are often attracted to colourful blooms like red, pink, orange, and purple, there’s a lot that can be said about white flowers. White blooms often represent purity and they are also a popular choice when sending sympathy flowers or for more somber occasions like funerals. They are ideal for showing your respect and […]