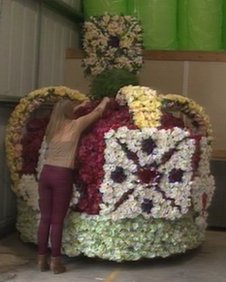 One loves a crown made from flowers

A florist from Shropshire has been commissioned to make a crown of artificial flowers in time for the Queen’s visit to RAF Cosford.

The display will measure 8ft by 6.5ft and will feature over 2,000 artificial handmade flowers and will be part of a welcoming pageant.

Julie Bates the florist in charge of the display said she and her colleagues were very proud to have been chosen to create the display.

The Queen will visit Shropshire on Thursday as part of her on going Diamond Jubilee celebrations. The crown will be used as a backdrop for the awards ceremony that will be taking place.

The flower crown was designed by Stevie Hosell who was helped by Steve Hunter who helped build the strong frame that will support the flowers. It took about five week to be constructed.

Ms Bates said, “We were actually very privileged to have been asked to do this incredible crown for the Queen. Making it out of faux flowers, which are all endorsed by RHS, was the best way to do it. Stevie was very clever, she’s used yellow roses which are actually the Queen’s favourite flower, and the colour yellow is her favourite”.

The organiser of the free event hope 20,000 people will attend at RAF Cosford which, along with the pageant and awards ceremony, will be hosting a picnic.

Christmas flowers and foliage for that festive scent

The right Christmas flowers and foliage can make all the difference when decorating your home for the festive season. By choosing flowers and greenery that have a special scent, you will help give your home that holiday smell. The sense of smell is said to be the most powerful of all. A single scent can […]

How to safely de-thorn roses

Roses are known as some of the most beautiful and popular flowers of all. So much so that florists around the world keep several varieties and colours on hand throughout the year. Red roses are popular for Valentine’s Day and other romantic occasions while yellow roses are a popular choice for Friendship Day. When you […]

Holiday gifts for loved ones far away

When your loved ones are far away it can be extremely difficult. Even more so when the holidays come around. Many people struggle during these times and wonder how they can let the ones they love know that they care. Holiday gifts are often presented in person but, given the long distance, gift delivery is […]