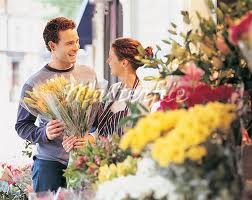 Hey good lookin’ outside the florist!

Men, if you’re looking to attract that certain someone, it looks like the best place to do so would be outside your local florist!

A study by the University of Southern Britanny in France found that one out of every four lone female shoppers would give their phone number to a handsome stranger if asked outside a florist. This is compared to less than half that number who would hand over their number outside a shoe shop.

In the study, 5 exceptionally gorgeous men were selected by a panel of women to take part in the study. They then visited shopping centres and approached 120 women shopping alone outside florists, shoe shops and cake shops, finding that those outside flower shops were more than twice as likely to succumb to their advances than those at the other shops.

The researchers hypothesized that this may be due to the link between flowers and romance, triggering positive and agreeable feelings in the women.

So men, if you’re thinking of popping the question, take that special someone to a florist and say it with a beautiful bouquet.

While you might be able to plan ahead for weddings, birthdays, anniversaries, and other expected occasions, funerals can often take us by surprise. It’s not only the loss of a loved one that comes as a shock, but also the financial aspect of funeral planning. While trying to process everything that has happened, you will […]

Flowers in the history of art

We decorate our homes with lush fresh flower bouquets throughout the year and we send flowers for special occasions too.  In this busy day and age, it’s quite common for us to skip the trip to our local florist and browse through flowers online instead.  Within minutes and a few mouse clicks, our online flower […]

A barge decorated completely seasonal flowers from around the globe will take the Queen down the Thames River to celebrate her Diamond Jubilee. Floral designer Rachel Thame, lead designer at the RHS Chelsea Flower Show, has designed this beautiful boat. The boat will be covered from flowers from the 16 countries that make up the […]