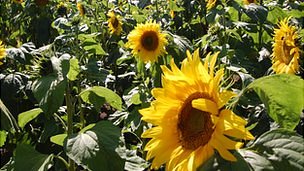 The Guernsey Sunflower maze has had to temporary close because it got damaged it the recent storms that have battered the United Kingdom. The maze which is situated in Saumarez Park had to close after being damaged by strong winds and heavy rain on Sunday.

The maze which had only been going for five days but incredibly in that five days over 1,500 people had visited. The sunflowers which for the flower maze are more than 7 feet high.

The organisers of the Victorian Walled Kitchen Garden said the storm had knocked down flowers and left gaps in the path, also many flowers have had their petals blown off.

As a result of this the organisers believe it would not be fair to carry on charging visitors to the maze.

Margaret Boucher, who is a volunteer gardener on the site, said: “We were astonished at the impact the maze had and delighted with the number of people who visited both gardens – many for the first time”.

The sunflower maze will reopen to the public on Saturday mornings between 9am to 12pm.

Danish Scurvy Grass is the fastest growing flower in Britain

Gritting roads during the recent cold snap in Britain has allowed a coastal flower to become the fastest spreading plant in Britain according to a conservation charity an expert has claimed. Danish scurvy grass has moved inland from the coast along roads where salt has cleared vegetation on the verges, says Dr Trevor Dines, of […]

There’s nothing better than surprising your significant other with a gorgeous flower arrangement for Valentine’s Day. Of course, keeping everything a secret is the top priority. In many cases, you want to surprise your partner or spouse with a bright bouquet first thing in the morning. This is why it’s so handy to place that […]

Help your plants recover from the harsh sun

Sunlight is an essential element for any plant. That said, for many plants, there is such a thing as too much sun. Even if you don’t believe it to be all that hot, the rays of the sun become that much more concentrated as they penetrate the glass of a window and your plant remains […]