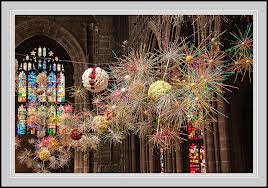 Last month saw the largest flower festival in the North-West appear in Manchester. Dig The City, a week long event which began on the 24th of July,is Manchester’s first urban garden festival. Events were held at over 10 locations across the city, with loads of activities including beautiful display gardens and interactive workshops.

On of the main attractions was found at Manchester Cathedral, where over 30000 flowers were used to create classical and modern music images to celebrate The Queens Diamond Jubilee. A number of recitals will also be held at the Cathedral throughout Dig The City.

As well as the Cathedral, the medieval quarter of the City Centre was also transformed with thousands of flowers. The event was being led by a Chelsea award winning group, as well as the organisers of Hampton Court Palace and other such flower festivals.

Over 40000 volunteers, plus organisations from both the private and public sectors have come together to work for months on end to create this amazing spectacle.

A huge marquee was set up along the side of the Cathedral, the ‘Diamond Jubilee’ marquee, to provide refreshments in the form of the Great British Tea Party.

Why should you choose seasonal flowers?

When shopping for flowers, you are bound to come across many options. Many florists will promote certain blooms and online florists often have a section on their website dedicated to seasonal flower arrangements. The question a lot of shoppers have is why they should choose seasonal flowers over other bouquets and there are several reasons. […]

Just for Mum from Prestige Flowers

Mother’s Day is almost upon us and this Just for Mum bouquet is an excellent way of showing her just how much you care. This colourful Mother’s Day flower arrangement comes with free chocolates too!   Prestige Flowers understands just how important it is to show mum some overdue appreciation. With all of her daily […]

Save on Valentine’s Day flowers without looking cheap

Regardless of how much you earn every month, saving money every way you can is always important.  We all enjoy spoiling the loved ones in our lives which often means that we overspend just so that we don’t seem “cheap”.  For couples and florists, Valentine’s Day is a busy one!  The most popular gift for […]