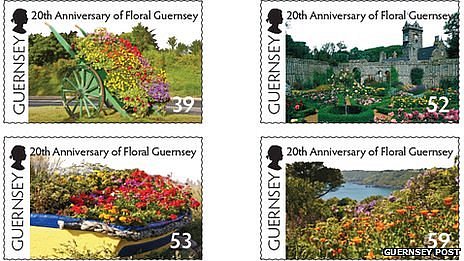 A set of postal stamps have been created to mark the 20th anniversary of Floral Guernsey. Each stamp with feature a specially bred daffodil flower. Horticulturist Rae Beckwith, who was born in Guernsey, created the special flower as part of the momentous occasions.

The group, which currently organises floral and environmental events all over the United Kingdom, were the inspiration behind the stunning collection which was released on the 27th September.

Six stamps have been produced in the first issue to mark the celebrations and the photos on the stamps were taken in the Bailiwick of Guernsey. They aim to reflect the rich variety of flora available in the islands. The stamps have pictures of La Seigneurie in Sark, Guernsey’s south coast and Candie Gardens.

Tony Spruce, who works for Floral Guernsey, commented that Guernsey had a rich variety of flora and the stamp issued picture the essence of this.

Bridget Yabsley, who works at the Guernsey Post, mentioned that everyone on the island of Guernsey is delighted with the stamps produced by Floral Guernsey and how they capture the glorious landscape of Guernsey.

Succulent care and what you need to know

Succulents are excellent additions to any home. Not only do they grow slowly, but they also require very little care. By catering to the basic needs of these plants, you can keep them happy and healthy for many years. Here is what you need to know about succulent care. Sunlight The first thing you need […]

Valentine’s Day is one of the most romantic days of the year and couples around the world choose to celebrate in different ways. The one concern is that the weather will not be right for certain activities. Which is why it’s a good idea to plan for poor weather. Even if the weather turns out […]

Whenever a baby is born, it gives the family and their friends a fantastic reason to celebrate. Choosing the right new baby gift these days has become increasingly difficult. This is because many parents usually take care of all their essential needs before baby arrives. So, what can you send to celebrate the new arrival? […]