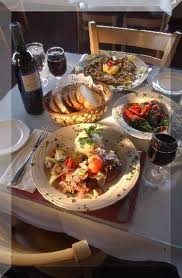 Flowers being used in cooking has dated back all the way to Roman times. Different flower recipes also exist in various cultures including, Chinese, Middle Eastern and Indian. They were very popular in the United Kingdom during the Victorian Era in the 19th century. Nowadays the flower is making a return to high end cuisine with some top chefs claiming they give an additional, creative twist to a meal.

Like all recipes used in high end restaurants the flower recipes can be replicated at home. Make sure the flowers you use are the flowers used in the recipes because not all flowers are edible and some can have an adverse effect on your body. Be sure to wash all flowers well to make sure they clean of pistils and stamens and only use the petals of the flower. Before you make the meal make sure none of your guests have any allergies.

Slice you bread equally and toast until a crisp, golden brown. Then get a bowl and mix some cream cheese with the lemon and parsley. In another bowl mix the rest of the cream cheese with the black olive pate. Grab a teaspoon and stuff the snapdragons with one or the other filling of cream cheese. Place the stuffed snapdragons on each slice of toasty bread and season with the extra virgin olive oil. The filling you use can vary as long as it remains delicate and not to overpowering so you can still taste the flavours that the flower has to offer.

Trim and cut the tuna into a block approximately two inches across, then cut the tuna into one inch steaks. Crush the salt, peppercorns, fennel seeds and lavender with a mortar and pestle. Then lightly oil the tuna with 2 teaspoons of the olive oil, once the oil is on the tuna evenly coat it with the tuna and the lavender pepper mixture, remove any excess. In a heavy bottomed cast iron pan heat up the last tablespoon of olive oil. Increase the heat on the hob to high and place the tuna in the pan. Make sure you sear the tuna for one minute then turn carefully, reduce the heat to medium. Sear the other side of the tuna for another minute until the tuna is medium rare. If you want the tuna to be rarer or well done the adjust the cooking times to suit your personal needs. Then remove the tuna from the heat and immediately refrigerate for a minimum of 1 hour. Don’t refrigerate the tuna for longer than 3 hours. The meal serves 8 people and it goes well with a Chardonnay.

The violets and the sugar should be poured into a small pot with some water and brought to the boil. Cook on a low heat for five minutes stirring with a wooden spoon. Cool and strain it. Make sue you clean the strawberries then mix them with the lemon juice and add the violets and sugar to the mixture. Keep in the freezer for a couple of hours and stir once in a while. Whip the egg whites and add to the mixture once two hours have passed, make sure you stir in the egg whites very carefully. Place the mixture back in the freezer and freeze for a further hour. The dessert goes well with a Prosecco.

Flowers are known for their beauty and gorgeous scents. Apart from being popular gifts for all occasions, flowers also have some interesting stories to tell. Here are some of the most interesting facts about flowers around the world. The gas plant is also known as the burning bush. Its leaves, seed pods, and flowers release […]

Flowers for a new neighbour

When somebody new moves into your neighbourhood, it’s up to all the locals to make the new arrivals feel welcome. At the same time, you will also be introducing yourself and satisfying your curiosity. Of course, since you don’t know anything about your new neighbours, you might not know what will make a great housewarming […]

Flowers for your Christmas cake

Many will agree that the best part of any meal is the sweet treat that comes at the end. Christmas dinner is certainly no exception and many families follow a tradition of making and decorating their own traditional Christmas cake. Christmas cake is known for its abundant flavour and variety of textures. In additon to […]