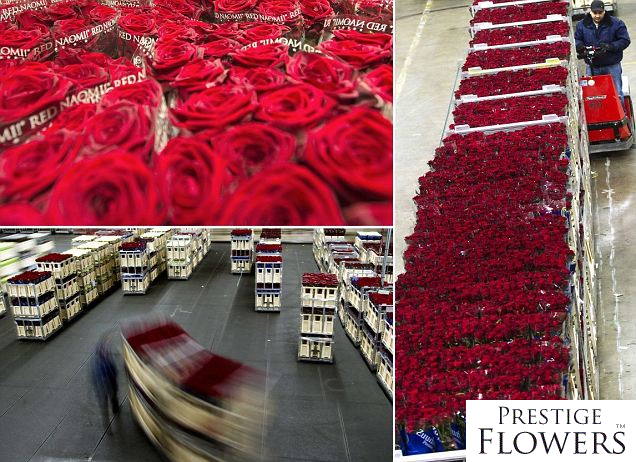 It’s a race against time. The busiest time of the year is looming in the Floral industry. The auction house in Aalsmeer (Holland) is expected to bring in more than 32 million roses in time for Valentine’s Day.

Holland houses the world’s largest operation for flower production and distribution. Over 4,000 people will pack the flowers and ship them directly to the UK just days before the romantic day. The total cost of flowers already sold to the UK, including Prestige Flowers, amounts to £17m, this is almost 32 million flowers.

With mother’s day soon after Valentine ’s Day this year, the operation will be fired back in top gear to cater the largest floral day in the UK.

The flower warehouse in Holland is the equivalent size of 400 football pitches. Many of the 100 million roses sold are grown in Holland, however many are brought in from Kenya and sold at the auction house in Aalsmeer.

The history of mistletoe

Mistletoe is often associated with Christmas but have you ever wondered why? This plant lives on the bark of trees and actually feeds of these trees. When trees lose their leaves, this plant thrives and it produces some of the most colourful berries and lush green foliage. Many years ago, the berries were thought of […]

Roses and rosé go so well together that they can even be arranged together to create the most beautiful centrepiece. You don’t need too many supplies and this arrangement design is so versatile that you can even use it to create other inspired displays. You need: Fresh roses Fresh foliage Two bottles of your favourite […]

Flowers that you can safely eat

During the winter, when it’s cold and rather unpleasant outside, we tend to huddle up indoors and eat more than usual.  Our food choices are often something along the lines of pasta, stews and other kinds of so-called comfort food.  After such a heavy meal, we normally feel so stuffed that we all we can […]