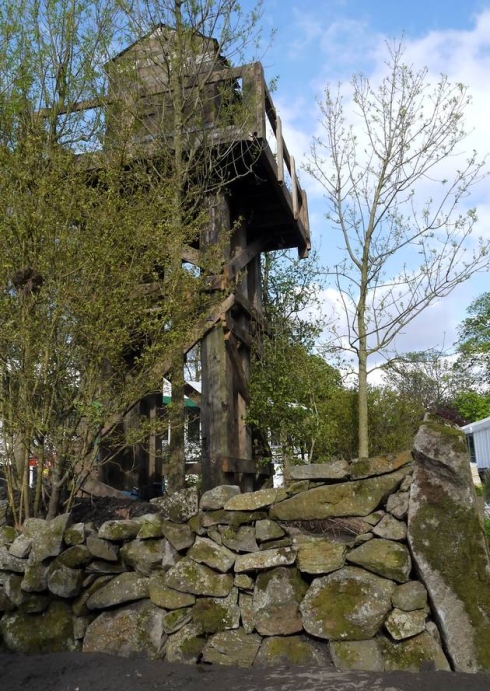 Containing barbed wire and a watchtower this was a show garden like no other. Marking the 60th anniversary of the Korean War.

The demilitarised zone separating North and South Korea is an area off limits to the civilians and holds a reputation for being a barren wasteland.

South Korean, Jihae Hwang visited the zone for the first time 10 years ago and didn’t find the abandoned battlefield expected.

It was only sixty years ago that the area was the front of the war between North and South Koreans, most of what was there was obliterated.

After the war a border was drawn to separate the country stretching for two kilometres on each side of the border, with nearly no human life.

Rare plants and animals that were endangered in the rest of Korea were able to thrive there untouched.

Jihae was struck by the power of nature when she visited the zone and its ability to heal itself, inspiring her to create the garden communicating healing and reconciliation to the world.

The garden is brightly coloured and messy with wild plants made to look like they have been growing there for decades.

Half of the plants were imported with difficulty from the country itself and the other half were found in Europe but they are all species/close relatives of the natives of those at the zone.

Bullet cases litter the undergrowth of this show garden, rusty metal is seen amongst the flowers then there’s a helmet, a lunchbox and a Zippo lighter lying near the bush.

The rusty war items are reminders of all the souls who died but feel oddly out of place in such a tranquil garden.

There are buttons in the garden which represent those on the jackets of the fallen soldiers.There are letters displayed in bottles that hang of the barbed wire fence separating the garden written by the families separated by the border.

The garden has won a gold medal at the Chelsea Flower Show.

The timing of the garden is so important to keep the peace as it is getting very dangerous and has even more relevance as tensions have risen in between the North and South again in the past few months.

Easter plant gifts and for your own home

Easter is a time for giving and it is also a great time to give yourself something special after the long winter. The right Easter plant can brighten up any home. If you are not sure what types of plants are best suited for this occasion, here are some ideas you can enjoy in your […]

If you are visiting a friend or relative for New Years Eve, it is only appropriate for you to take something along for your gracious host. Even if they do not want you to bring and foods or sweets, you can at least bring a bottle of wine and something to brighten up their evening […]

When you want to decorate a room or special occasion but you don’t want or cannot use fresh flowers, you might find paper flowers perfect. Paper flowers can be made and arranged in advance which can really take the pressure off if you have other things to plan and do. Paper flowers are also great […]