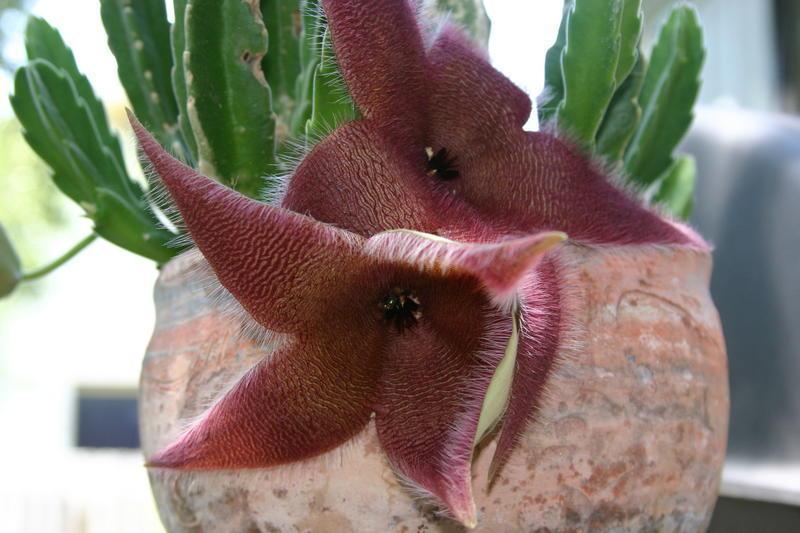 Usually when people think of flowers, they think of delicate, beautiful flowers that are often accompanied with sweet scents, and while this is usually the case for most flowers, there are some species that look like they jumped straight out of a horror movie! Read on to see our take on the top 5 freakiest flowers in the world!

Native to the Balkans , and widely disliked, you certainly don’t  need to see this plant to know it’s there, if you can’t see it standing at over a meter tall. And by not needing to see it to know it’s there, we mean you could most certainly smell it, the flower emits a smell that resembles a animal carcass from its fleshy, latex like centre, which it uses to attract flies ; it’s primary method of pollination. This flower not only offends the nose, it is also a horrendous eyesore, boasting a large, Dark purple flower, with a black, rubber like gland in the middle which is responsible for it’s stench, which is surrounded by large, misshapen unsymmetrical leaves.

This flower is native to the dry regions in south Africa, and is an unforgettable flower, when you see and smell it, you will never confuse another plant for being it…it truly is a weird and unique flower!

When matured, the flower grows petals that can grow very large, and when fully grown the flower head can have a span of 13-18 inches! But that’s not why this plant is so easy to recognise, the flower itself is coated in a furry hairs, to help retain moisture in its natural habitat. Like the Great Dragon flower, the Starfish flower releases a scent to attract flies for pollination, while not as pungent or noticeable at range than the great dragon, when close enough, it still reeks enough to have given it the nickname – carrion flower – a name given to all plants that release a horrible stench , reminiscent to dead flesh.

Native to China, the Black bat flower is one of the weirdest looking flowers around, growing up to around a meter tall, with dark black leaves that are around 12 inches across, and “whiskers” that can grow up to 2 feet tall, you wouldn’t be blamed for thinking it was alien! While this flower doesn’t give off a foul stench, it does look incredibly strange, and hardly gives of a scent.

Native to Indonesia, this is a flower that has the worlds largest single flower body, at an incredible span of 1 meter and weighing as much as 11kg, it is also the only visible part of the flower that is above ground. Although it has this impressive title, it is a flower that most people would rather not encounter again, as it emits and incredibly potent scent similar to rotting flesh, which it uses to attract flies and dung beetles for pollination. There have been encounters where because it is so low to the floor, and often concealed by grass, unfortunate people have accidentally stepped into the large hole at the centre of the flower, covering their foot with the foul stench it emits.

Native to the rainforests of Sumatra, this is the largest flower in the world, but is by no means a pretty one,  with a huge single leaf in the centre of the flower which emits a stench so foul, it is widely regarded as the worst smelling flower in existence, which smells of decomposing flesh. The flower itself can grow up to a staggering 6 meters tall, and five meters wide, so it’s not exactly hard to miss. Like other “carrion flowers” or “corpse flowers” the reason the Titan Arum smells to badly is to attract flies and other insects which feed off dead flesh, and are drawn to the flower by its scent.As you probably now realise, these 5 plants aren’t exactly ones you would like to grow indoors….or even outside in your garden for that matter! I think I’ll stick to roses.

For the most part, arranging flowers means ordering a bouquet from your local florist and then transferring the bunch to a suitable vase. Of course, if your flowers come with a vase, then all you need to do is enjoy your fresh flower delivery! If you are planning on ordering various loose stems, on the […]

Funeral flowers and their meanings

By now, most people know that different flowers send different messages. This is because each bloom is associated with a particular meaning. When it comes to funeral flowers, it’s more important than ever to make sure that you get it right. Here are some of the most thoughtful and appropriate funeral blooms from which you […]

Summer is the perfect season for parties and spending time outside. If you want to entertain guests this summer and you want to transform a simple tea into something even more classy, here are some decorating tips! Firstly, you need to highlight all the areas on which you will be focusing. Your list should include: […]