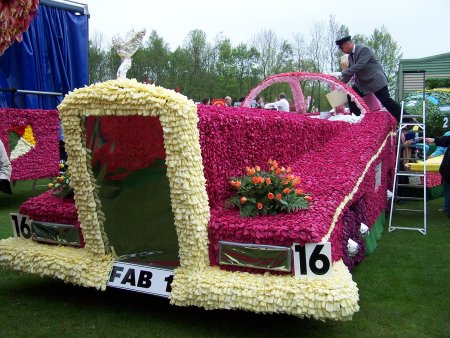 The Spalding Flower Parade is on tomorrow and starts at 2pm.The history of the parade dates way back to the 1920’s and 1930’s. The jubilee in 1935 for King George V and Queen Mary coincided with the time the tulips were in flowers and in 1948 the Tulip Week was organised with a 25 mile tour through villages and country lanes to show the best fields and by 1959 Spalding had their first parade which after a few years became world famous and more popular than the actual tulip fields.

There is a different theme for the parade each year and a single float can be as much as 50 feet in length and decorated by as many as 100,000 tulip heads. They have a new Flower Queen Float and a trumpet fanfare and the theme this year is Food Glorious Food. It will be a great day out with marching bands, live music and street entertainers.

Summer brings about a vast array of rich and very beautiful flowers. The cheerful colours are very enchanting. Order before 3pm for same day flower delivery and 4pm for next day flower delivery. Sunflowers are traditional and the classic summer flower. The big bold blooms of sunflowers portray summer more than any other flowers, bringing […]

Online florists cater for all occasions

Online florists make flower shopping easier than ever! Instead of driving to the flower shop and trying to pick the most suitable bouquet, you can do all of your shopping from the comfort of your home or office instead! The best part of all is that you can use your online florist for any occasion! […]

Dandelion tea benefits and what these flowers have to offer

Different plants contain different beneficial properties. By enjoying a tea or infusion made from these plants, we can enjoy the benefits they have to offer. If you have never tried dandelion tea, here are some reasons why you may like to add it to your diet. Anti-Depressant When you see these flowers in a field, […]