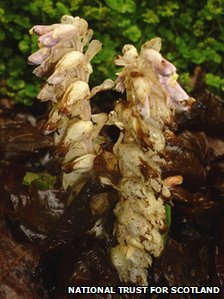 Rare flower has been found in Scotland

A new existence of colonies of an extremely rare flowering plant has been found in woodland at Dollar Glen.

The flower, which is named Toothwort, was found when members of the National Trust for Scotland who were at the time checking on the condition of the Glen. The flower has not been seen in existence for over 10 years and ecologists had feared the flower had altogether disappeared and become extinct.

Ecologists also found another uncommon flower, the Meadow Saxifrage, at the House of the Binns, near Linlithgow. The Toothwort flower has no chlorophyll and only survives living off elm and hazel roots.

Mr Lindsay Mackinlay, National Trust for Scotland Nature Conservation Advisor claimed that this was a very exciting find. He says for years ecologists have had the eyes open looking for proof this flower still grows and they had all but given up hope when they found it growing metres away from the footpath they were walking down.

The Meadow Saxifrage, which was found at House of Binns, is an increasingly rare flower of lowland grasslands, which flowers between the months of April and June.

The flower used to be widespread in the countryside but has since disappeared from large areas in the central Scotland.

Mr Mackinlay said that part of the work he does is to protect the wild flowers growing in Scotland. The best part of the job he says is when they get a new area of uncommon and beautiful flowers and the trust works hard to conserve them into the future.

With Christmas less than two months away, what better way to show that special someone how you feel that with a bouquet from our stunning Christmas range here at Prestige Flowers, all of which are available for UK next day delivery. One of the beautiful arrangements is our Merry Christmas bouquet. This beautiful bouquet, inspired […]

Spring is here and it’s time to decorate your home, office, and everywhere with the season’s finest blooms! If you want to embrace the warmer weather and brighter days, then why not welcome the outdoors inside with some colourful fresh flowers? Here are some spring flowers that will transform any living or professional space. Tulips […]

Creating your own wildflower garden

There is nothing quite like the look and smell of a garden filled with wild flowers. The beauty of nature can be enjoyed in your garden as well as inside your home. Growing your own fresh blooms gives you the opportunity to bring nature into your living room, kitchen, bedroom or any other area of […]