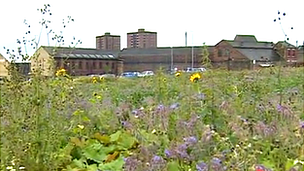 A company in the heart of pottery country has planted thousands of flowers around its premises in the hope of attracting new investment into the company and in the surrounding community.

Emma Bridgewater pottery has spent over £10,000 planting wildflowers, poppies and sunflowers on their site in Hanley. The site has been empty since 2007 when the Stoke City council demolished the derelict housing estate which used to stand there.

Manager Director of Emma Bridgewater pottery had this to say “You’ve got to make the city attractive to help revitalise the economy”.

He added, “To do it successfully you have to make it feel like an attractive place to live and this is a very small part of that overall process. There used to be a big sign hanging off the last terrace saying ‘Welcome to Beirut’ as you came in here, so it was very bleak and we want to attract investment to the area”.

The area around the factory totals up to five acres and it was part of the Pathfinder Project housing scheme.  The plan was originally thought up by the Labour government who wanted to destroy thousands of terraces across and the country and do them up and then involve the wider country in the property boom.

Stoke on Trent City Council are expecting housing developers to begin work on the site in 2013.

Autumn flowers and other tips to freshen up your office

When you are extremely busy, it can be quite easy for things to escape your attention. Your office may have even become quite messy and disorganised which makes it even more difficult to perform your duties efficiently and effectively. Before you put any autumn flowers or potted plants on display, take a moment to really […]

When you receive a fresh flower delivery, you might be tempted to place it in a vase with water and let it be. However, no matter how amazing the bouquet looks, there is still some work to be done. Preparing the stems properly will ensure that your flowers will last that much longer. Here […]

You don’t have to be a professional florist if you want to arrange flowers like a pro! With the right tools and these tips, you too can make the most of every bouquet of flower that you receive. Here are some easy steps that you can apply to every flower delivery. Prepare your materials Start […]