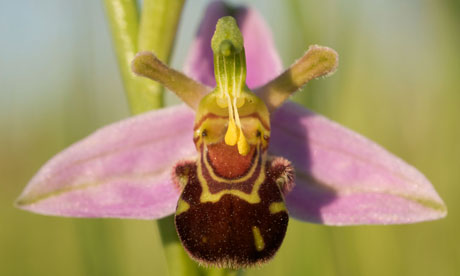 As the rains have made this year one of the wettest on record the crops for this year’s harvest are at a dangerous low level. But as a consequence of the harvest levels being low food prices are bound to rise. One flower which has taken advantage of the low harvest levels is the orchid.

The orchid is one of the nation’s favourite flowers and they are flourishing in the British countryside in the wet weather. The bee orchid in particular is doing very well; it is named the bee orchid because of its distinctive bee-like appearance.

Andy Byfield of the charity Plantlife had this to say, “Conditions may not have suited humans, but they have been ideal for flowers like the bee orchid. We had a warm winter and then the drought in March and April disappeared quickly as the rains arrived. As a result, bee orchids have flourished”.

Other flowers which have done well in the wet summer are Mediterranean annuals such as small restharrow, which is well known for its pink and white flowers. “These have also thrived,” added Byfield. “However, this may not continue. Plants like these do well when you have arid conditions one year and very wet ones the following year. If it keeps on raining next year, coarse grass will eventually swamp the grounds they are growing in and all the gains will be lost”.

Many people think of flowers as gifts for special occasions. They are also, however, excellent for pampering yourself from time to time. When you treat yourself to flowers, you will enjoy a wonderful emotional boost that can affect many areas of your life. If you are on a tight budget and you think that you […]

Her first Mother’s Day is the perfect opportunity to start some new traditions. Since you will have many more Mother’s Days to enjoy together, you want to make sure that you start a sustainable tradition. Here are some ideas. Fresh flowers Many people like to set up a standard flower order starting from her first […]

It sounds like something out of a Harry Potter film but a Professor in Australia has created a special potion that makes flowers glow in the dark. Mark Tester has created a spray knows as Galassia, which, when sprayed on to a flower or foliage makes in luminescent. This is really a marvellous effect and very […]