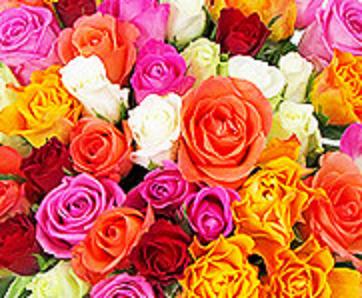 The rose is probably the most recognisable flower in the world. It has become increasingly popular for many occasions and the high demand for this flower has not declined at all over the years. It is seen by florists around the world as a staple and you can usually find several colours and varieties available at any given time.

It’s interesting to know that there are about 150 different species of rose in the Northern Hemisphere alone. They are available in a wide variety of colours and you can even find some multi-coloured varieties. The black rose is technically not black but actually a very dark shade of red.

A rose fossil was discovered in Colorado – which just goes to show just how long these flowers have been around! Over 54% of Ecuador’s land is covered with roses and this is only surpassed by the 80% ratio in Zambia!

Roses are fairly hardy and the plant itself can last for years provided it is properly cared for and kept free of any diseases and pests. The rose bush covering Germany’s Hildesheim Cathedral is more than 1,000 years old and still going strong.

Roses were very significant in Roman culture. They were used to decorate various rooms and they were even worn around the neck. During the middle ages, rose petals and oils became a popular and luxurious addition to baths for the wealthy.

The colour of the rose determines its associated meaning. For the most part, when you send roses, they convey a message of love or affection of some form. Yellow roses are associated with friendship while red roses symbolise a deep and passionate form of love.

The so-called “Happy Rose” is a multicoloured rose which is believe to be the most expensive of all roses on any market. A single stem can go for anything in the region of £25.00.

Fuchsia flower facts you may not know

When you think of fuchsia, you most likely imagine the colour. These flowers are also known as lady’s eardrop and it is classified as part of the same family as evening primrose. The fuchsia flower originates from Mexico, Chile and Argentina. There are more than 100 species and even more varieties available today. They were […]

The wonderful variety of Chrysanthemums

A bouquet of fresh flowers usually costs a reasonable amount of money. Even if you opt for the cheapest flowers, you always want to make sure that you get the most value for money. This is why it’s important to take proper care of your cut flowers and, if possible do whatever is necessary to […]