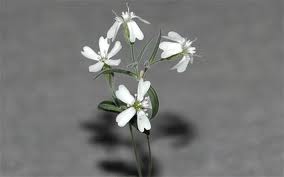 Seeds have been found in a hole dug by animals in Siberia after over 30,000 years in ice. Scientists from Russia found the seeds and grew them in a laboratory. These seeds grew producing a beautiful prehistoric flower. This is a real insight to what life was like thousands of years ago and opens a whole new level of exploration for scientists. The seeds were fertile and the flowering plants have produced more seeds

It has been confirmed that this is now the oldest flower on the planet. It is hoped that the scientists will be able to repopulate the plant with many enthusiasts eager to get their hands on a seed or two. This could take many years; a seed from this plant is worth more than gold in its weight. Prestige Flowers hopes to be the first to be able to offer the sale of this plant for people to give as an extraordinary very special gift. But more valuable than that is the magnificent story that lies behind it and the hidden knowledge it can tell us about early flowers over 30 centuries ago.

The origins of wedding traditions

There are plenty of traditions that we follow throughout every year. We celebrate birthdays, the arrival of new babies, anniversaries, and other occasions. Each occasion comes with its own traditions and weddings are no exception. Here’s some insight into why we follow certain wedding day traditions. While the flowers that decorate the ceremony are bound […]

How to successfully press roses

Roses are not one of the easiest flowers to press. That said, it’s not impossible if you have just a bit of patience and the right techniques. Once you have pressed your first batch, you’ll understand what makes all that effort worthwhile. Preparation You will need to start by preparing your roses properly for pressing. […]

Why Poinsettias are associated with Christmas

Many years ago, the Aztecs used Poinsettias to dye their clothing and as a cure for various ailments. The colour red was associated with wholesomeness which meant that it was often included in religious rituals. It was not until the 19th century that the plant was introduced to America. Dr Joel Roberts Poinsett, the U.S. […]