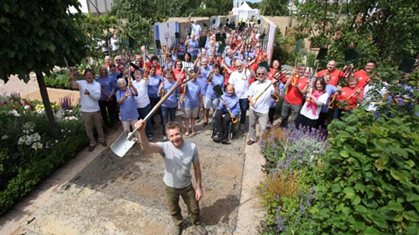 The guys who made the Tatton flower show

Gardening in the community has had a boost in interest with RHS reporting a 20% rise in It’s Your Neighbourhood and RHS Britain in Bloom groups across the North of England. As the RHS Flower Show Tatton Park gets ready to open to the public the charity hopes more people will join in and begin in helping transform their local communities.

This year, the RHS has teamed up with the gardening charity Groundwork at all its flower shows to show the public the difference a community garden can have on the area where the people live. At the RHS Flower Show Tatton Park, Chris Beardshaw who is a landscape designer and broadcaster will create Urban Oasis to show visitors how the abandoned inner-city alleyways can be turned into productive and safe green havens.

RHS research has recently shown that antisocial behaviour plummets when neglected alleyways become managed by the community. For example an overlooked alleyway in Newton Heath, Manchester left households vulnerable to burglaries. The residents who lived in the houses then set up an RHS It’s Your Neighbourhood group and turned it into a community area.

Newton Heath resident, Celia Binns had this to say, “Young people used to congregate here and put graffiti on the walls. We used to get drug users coming in. It feels safe now”.

Chris Beardshaw said, “Evidence shows that access to green space that is looked after transforms people’s lives and plays a fundamental part in drawing communities together; as a consequence, communities see reductions in crime, stress levels and neglect, and an increase in neighbourliness, community spirit, social mobility and economic investment”.

Continuing the community garden, elements of the Urban Oasis will be used across the North West in various projects, including the Atherton Road community garden in Ellesmere Port, an underused neglected green space, which has been earmarked as an area to be transformed into a place of sensory planting and vegetation to encourage wildlife.

Prestige Flowers have now added the beautiful twin stemmed orchids to their plant range. This orchid is a Phalaenopsis, or as its better known as the Moth Orchid. Quite simple because the beautiful petals make them look like a giant moth. Each of their flower plants come in very stylish ceramic pots, the orchids come […]

Planting flowers is a simple and enjoyable task which you can enjoy with all the family. In this article I will take you through the very simple steps on how to plant a flower and the best way to look after it to help it grow. First you need to purchase a potted flower. You […]

Anthuriums are one of the most attractive and appealing tropical flowers of all. They are also known for lasting longer than many other kinds of tropical blooms. As a plant, they will bloom throughout the year if the conditions are favourable. This means that the grower needs to focus on temperature, water, light, and getting […]