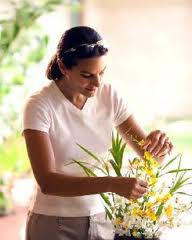 Grumpy in the mornings? Cheer up with Flowers!

Mornings is the general time of day when most of us are in bad moods and can’t be bothered to get out of bed and start the day. However research claims that flowers can be the cure to our early morning bad moods.

Harvard University in America conducted an experiment where people claimed to be in bad moods in the early hours of the morning but seeing flowers first thing in the morning made them happier and more willing to start the day.

Lead researcher of the study Nancy Etcoff says, “The morning blahs, it turns out, is a real phenomenon, with positive moods – happiness, friendliness and warmth, for example – manifesting much later in the day. Interestingly, when we placed a small bouquet of flowers into their morning routines, people perked up”.

Doctor Etcoff is stating people who took part in the study respond to flowers which had been placed in the rooms they visit in the morning. Most people claimed they liked looking at flowers especially in the kitchen as they eat breakfast.

Doctor Etcoff added, “What I find interesting is that by starting the day in a more positive mood, you are likely to transfer those happier feelings to others – it’s what is called mood contagion. And the kitchen is the place where families tend to gather in the morning – imagine how big a difference a better morning mood can make”.

The final results of the study shows that people are emotionally impacted by seeing the flowers at home and are less anxious during the day. In fact some people claimed that seeing the flowers in the morning gave them an energy boost which last the whole day.

For many people, the New Year means a new beginning and a fresh slate. It also means that the year ahead will also bring plenty of new challenges. This is exactly why a good luck bouquet will prove to be an appropriate gift for somebody else or even for yourself.   When sending flowers for […]

The Grandeur bouquet is one of the proud members of our brand new Luxury Collection at Prestige Flowers. It is a wonderful gift to give to a loved one at any celebratory occasion such as birthdays, anniversaries and above all else it really is perfect bouquet to give to your partner on Valentine’s Day. The […]

Easter lilies are popular house plants. They are particularly popular around this time of year. They make lovely gifts and they are great for decorating your own home too. If you have or would like to buy an Easter lily but you’re not sure how to care for it, here are some simple tips. Choosing […]