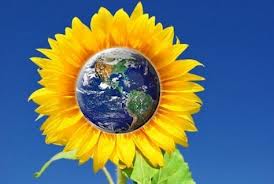 Flowers have had to adapt to survive

Flowering plants have been on this planet for more than 100 million years according to some of the top scientists. Botanists believe that flowers evolved from evergreen trees which produced magnolia-like flowers. Flowers often have the look of delicacy and innocence but they are on the planet to do a job and it is a very important job in regards to the whole eco-system.

Approximately 90% of all plants today are flowering plants. Flowering plants have the scientific name angiosperms, which means “hidden seed” in Greek because their seeds are enclosed and protected by a fruit. This being the case it puts flowering plants one step higher on the evolutionary scale than gymnosperms, which means “naked seed” in Greek. They are called the naked seed because they bear their seeds on cones, where they are less protected.

The angiosperms have highly efficient vascular tissues, which move water and nutrients throughout the plants system. This procedure allows leaves to maintain a high rate of photosynthesis which in turn allows the flowers to mature a lot quicker and they can start reproducing at an earlier stage in the lives.

Flowers began to co-evolve with flowers over 1 million years ago. This increased the chances of pollination and reproduction of new flowering plants. Flowers attract pollinators like bees and moths with different sized petals in different colours, they also give off different scents in the hopes of luring in a pollinator. For example, flowers that wish to attracts moths or bats will bloom at night when the creatures are awake and they will have white or pale colours petals so they can be easily seen. Pollinators get pollen stuck on their bodies and distribute it by chance to other flowers when they are searching for more pollen or nectar for nourishment.

Sunflowers are impressive for a number of reasons. When you see a field of sunflowers, you can’t help but be amazed by the gorgeous colour and sheer size of these flowers. Apart from their use in agriculture, these gorgeous blooms also look great in a vase. One interesting fact that you might not know about […]

Perfect flowers for your anniversary

When you get married, every week and month will feel like a milestone. After several years, you might become so comfortable with one another that your anniversary nearly slips your mind. Before you know it, you are coming up to 10 or 15 years of marriage and you might not feel quite as inspired when […]

When it comes to the holiday season, your home might fill up with all sorts of Christmas decorations. Whether you have a spacious home or something a bit more cosy, compact décor offers some great advantages. Wall baskets filled with flowers are an excellent alternative to placing bouquets on tables. So, instead of having flowers […]