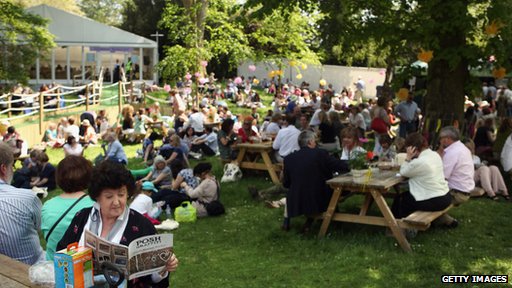 The Chelsea Flower show is one of the most prestigious flower shows in the world today and has been since 1913. It seems crazy though that each year this amazing show is squeezed onto two fields the size of football pitches next to the famous River Thames. However this event has been held in the same place for 100 years and organisers would not have it any other way.

All year round from about mid-June to the following April the fields are used by retired people, primary schools and local dog walkers but for a month and a half the fields transform in a site for of colour and atmosphere.

Previously the show was held in Chiswick, Kensington and the Embankment but in 1913 this all changed when a tent with 244 exhibitors arrived in Chelsea. This year’s event, which opens on Tuesday 21st May, will have over 500 exhibitors and will cover more than 11 acres.

A small flower firm from Somerset named Blackmore and Langdon were at the very first Chelsea Flower Show and have gone back every year since. Rosemary Langdon attended her first show in 1958 and said that it could be bigger than it is but the small grounds is what brings the true magic to the show.

John Langdon’s grandfather created the firm Blackmore and Langdon and complains about the loading and unloading each year as their isn’t enough room but he says you cannot take this show away from Chelsea as it will no longer be the Chelsea Flower Show.

Amazingly it takes 800 people working for 33 days to prepare the show for the public to enjoy.

The show became so overcrowded in 1979 that the turnstiles had to be closed and people were unfortunately turned away. In 1987 because people were being turned away every year there was talk of moving the show to another location in London or leaving the capital but this never materialised.

An attendance cap was put on the flower show in 1988 after dangerous overcrowding in the previous years. The cap stands at 160,000 and in 1986 approximately 250,000 visited the show and people there at the time described how dangerous and scary the overcrowding was.

Mr Bennett, who sets up the show each year said that he expects the flower show to stay in Chelsea for the next 100 years.

Use rose petals for romance

Roses are known for their association with love and affection. This is why they are the flower of choice when it comes to such occasions as Valentine’s Day, anniversaries, and of course when you need to find a way out of the dog house! Roses can also be used in other ways to demonstrate your […]

Uses for a damaged vase

It can be so disappointing when you have a lovely vase that ends up damaged. As beautiful or sentimental as it is, you might not be able to use it in the same way you did before. However, before you toss it out, think about these great ways of putting it to use around your […]

Not good with flowers! iPhone app will keep them alive!

It always lovely to receive a plants and flowers from a loved one, we place them in a nice place but the only problem is that they keep dying on you. If this is you then you, and your plants and flowers, need this high tech gadget brought to you by the iphone. This ingenious […]