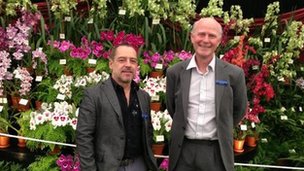 First awards given at the 100th Chelsea Flower Show

This has become Mr Evison’s 25th gold medal at the flower show. His exhibition of clematis cultivars in the Great Pavilion won the approval of the judges on Monday before the show opened to the public.

The flower show which is held in the grounds of the Chelsea Hospital is in its centenary year. The Eric Young Orchid Foundation does not host an exhibit at the flower show every year as they have orchid events and displays all around the world.

The curator of the foundation Chris Purver has announced he is very pleased with the award and what the foundation has achieved. He said the foundation was aiming to put on a display which represented people from 100 years ago and he is glad the judges understood that.

St Martin’s Flower Club, also from Jersey, had an exhibit this year but they did not win any awards.

How To Care For A Bouquet Of Fresh Cut Flowers

Everyone knows that fresh cut flowers don’t last forever.  In fact, even if the flowers are never cut from the main plant, they will still perish after a certain period of time.  However, if you are lucky enough to have somebody send flowers to you or if you decide to spoil yourself with a bunch, […]

Different types of potted plants require different care. It’s not only about the amount of water, but also temperatures, sunlight, and when to trim the plant so that it can flourish when it blooms again. Here are some essential care tips for the most popular house plants. African Violets are lovely plants and they can […]

Each season welcomes a wonderful array of fresh flowers. Different types of plants enjoy different weather conditions and seasons. During the spring season, you will notice that your choices are even more abundant. Local florists have so many different options from which to choose that you might not know where to start. Below you will […]