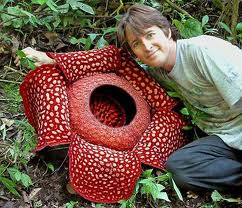 10 hilarious things you should know about Flowers

Everyone loves flowers. Everything about them is lovable from the scents they produce to the funny shapes and sizes they grow into. Flowers have been an integral part of human life over the past thousands of years, they were generally used in ancient times as medicinal purposes and they are still used for medicinal purposes today. Below are some fun facts that you may not have known about flowers.

1.Tulip bulbs were so sought after in Holland in the 1600s that people would pay more for tulips than they would for gold.

2. Tulip bulbs can be substituted for some types of onions in certain recipes.

3.The world has some pretty big flowers but the biggest species of flower is the titan arums which produce flowers 10 feet high and 3 feet wide. On a downside the flowers smell of decaying flesh and are also referred to as corpse flowers.

4. Approximately 60% of all fresh cut flowers in the United States of America are grown in California.

5. Hundreds of years ago when the Vikings first invaded Britain they landed in Scotland and they were slowed up by the wild thistle which gave the Scots enough time to escape. After this occurrence the wild thistle became Scotland’s national flower.

6. In 2002 scientists found what they believe to be the oldest flower in the world. The flower which resembles a water lily is named Archaefructus sinensis and is approximately 125 million years old.

7. The juice which comes from the bluebell flower use to be used to make glue.

8. Most people know that Dandelions are weeds but not all people will know that the flowers and leaves of a dandelion flower are a rich source of vitamins A and C, iron, calcium and potassium. One cup of dandelion greens provides 7,000-13,000 I.U. of vitamin A.

9.Blue Cohosh, which is also known as squaw root or papoose root, was used by Native American women to ensure an easy labour and childbirth.

10. When the Greek warrior Achilles was born, his mother dipped him head first into a bath a yarrow tea, believing it had protective qualities. Yarrow is still used in the world of healing today and was used during World War One to heal the wounds of soldier’s.

A wedding boutonnière your groom will love

When it comes to your wedding flowers, you most likely plan your centrepieces, ceremony décor and handheld bouquets. In so many cases, your groom’s wedding boutonnière is almost forgotten or it appears to be more of a footnote than anything else. This is rather unfortunate since the male population of your bridal party don’t have […]

Making the autumn transition in your home

Once summer comes to an end, it’s time to prepare for the cooler temperatures and falling leaves. As the natural décor outside changes, so too should your home décor. Remember, home décor is not limited to the interior of your home and there are a number of ways to achieve the best look. The entrance […]

While we generally place a great deal of focus on Mother’s Day every year, it’s also important to remember that Father’s Day is another significant occasion and Dad also needs some thanks and appreciation. Fortunately, your florist knows just how to help you make him feel special on this day! If you are looking for […]