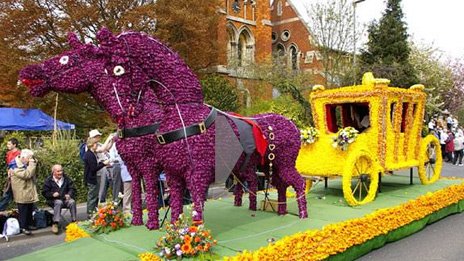 A tulip shortage because of the prolonged winter weather is affecting the last flower festival in the Lincolnshire town of Spalding. The organisers of the Spalding Flower Parade are expected to bring in the tulips from France as there is such a lack of option in the UK market.

Growers, who prepare the flowers for the parade, state the current cold weather is the worst growing conditions for tulips in living memory.

The Spalding Flower parade has been running since 1959 and in its heyday attracted over 100,000 spectators. It is being cancelled after two of the councils who contribute to the budget of the parade decided to end its contributions.

Kathleen Codd, who is the flower parade manager, stated that the likelihood of tulips from the UK being used in the show as very low. She also mentioned that the tulips will be exported from France or another country on the continent. She said that if tulips could not been found in time then a wide variety of other materials would be used for the floats being created for the parade.

A single float in the parade about 50ft in length can be decorated with as many as 100,000 tulip heads.

The flower parade will take place on the 4th May and it is the last one to take place as councillors say the falling attendances does not justify the cost of planning and executing the parade each year.

Wild flowers and how to keep them fresh

Wild flowers have a special kind of beauty and they can make a great bouquet if they are arranged just right. In fact, the key to arranging these types of blooms is to not overthink it. Simply bundle them together as if you just picked them in a local field. Of course, another concern that […]

What You Need To Know Before Sending Roses

It’s pretty much common knowledge that roses are the ideal flowers to send when you want to show somebody special just how much you care.  A slightly lesser known fact is that different colour roses have different meanings.  For example, if you are ordering flowers to celebrate friendship, yellow roses would be the perfect choice.  […]

Choosing The Perfect Mother’s Day Flowers For Your Wife

No matter how long you have been married for, it’s important for all the husband’s to know that Mother’s Day is the perfect occasion to celebrate their mothers and the mother of their child or children.  Many of us focus on getting the perfect flowers for Mother’s Day delivered to our own mothers that we […]