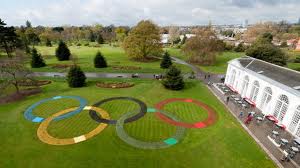 To mark the grand 100 day count down to the Olympics, to be held in London later this year, a giant  floral arrangement of the world recognised Olympic Rings was placed at the Royal Botanic Gardens in Kew. Amazingly, it took over 20,000 flowers to make this arrangement, quite impressive! So large that it will be visable as our guests arrive from the skies. The idea behind this was so that it will be seen on the flight path on one of the busiest airports in the world.

People flying in from Heathrow airport will see the Olympic rings comprising of Pansy’s to make up the light blue ring, the yellow is made up from violas and for the black too and Mentha suaveolens for the green and finally violas again for the red. Even the compost and soil around these flowers has been safely dyed in the colour to make it solid. It only gets better!

We are proud to announce the latest addition to our fabulous floral line-up – Team GB! This bouquet is just what any patriot needs during this year’s Rio Olympics. Whether you want to treat yourself to this stunning bouquet or send it to a friend, you are bound to be filled with pride every time […]

Why and How To Remove Guard Petals on Roses

When you receive a fresh flower delivery from your local or online florist, you will notice that certain measures are taken in order to ensure that your arrangement arrives in top condition.  You may have noticed, with regards to roses in particular, that some of the outer petals aren’t quite as perky, colourful or attractive […]

A Christmas wreath hanging on your front door or prominent wall in your home will certainly make a joyful statement. Not to mention the amazing scent that will flow through your home or greet you every time you come and go. Of course, you want to keep your wreaths and garlands as fresh as possible […]