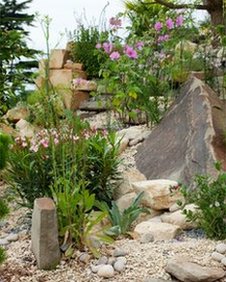 A middle eastern themed show garden has won gold at the Hampton Court flower show. The garden was designed to boost middle east tourism and the gardener who won the award is from Gloucestershire.

The garden is named The Discover Jordan Garden and was designed by Paul Hervey-Brookes. The flower show takes place in London.

The garden claimed gold in the new World of Gardens category. Landscapes from all over the world are featured in this category.

The Jordan Tourism Board (JTB) invited Mr Hervey-Brookes to bring to life the countries history, traditions and cultures by using plant life and flowers.

After winning gold Mr Hervey-Brookes had this to say, “The JTB was looking for a designer who they felt would understand intimately a very unique and diverse plant range, and someone who had exhibiting track record. So they asked if I would be interested in going to Jordan to spend some time there and then to design this garden for them”.

When Mr Hervey-Brookes visited Jordan he learned that gardens were used for growing food and animal crops and not just for personal use.

He wanted the garden to symbolise the “wild ruggedness of the landscape” as well as the fact Jordan has more plant wealth than the UK in a much smaller space.

The award is the first one Mr Hervey-Brookes has won at Hampton Court flower show.

He added, “I get two things – for best destination I get a rather large and very heavy crystal bowl, and because it is my first ever gold medal I actually get a genuine gold medal, so that is quite exciting”.

Artificial plants and what makes them a great choice

If you are looking for a way to spruce up your home or office but you don’t know how, you should consider adding a few artificial plants. While fresh plants offer a number of benefits, many people don’t realize just how beneficial artificial plants can be too. Here are some of the main advantages of […]

£100K raised thanks to the Lincoln Flower Fest

More than £100,000 has been raised by the volunteers of the Lincoln Cathedral Flower Festival. With almost 150 flower displays, they were created with the recent success of the Oylmpics, notable GOLD. The proceeds are to go towards the maintenance of the Cathedral. One of the developers have stated that the whole festival has been […]

So you are looking for a reason to send flowers to someone? If the fact that they are a nice gift that look good and smell even better is not enough then read on….   1)  Flowers are non-toxic and bio-degradable, so they aren’t going to harm the environment in the same way a fur […]