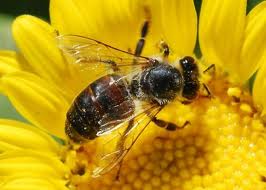 Flowers making it sticky for bees!

Petals of most flowers have cone-shaped cells that cannot be found on any other part of the flower, this has been known for a long time by scientists around the world who study the growth and evolution of flowers.

The top of the flowers petals now act like a sticky glue velcro which the bees can stick to when collecting the pollen they need for honey. The stickiness is definately advantageous if a particulary strong wind is blowing at the time when the bee is pollinating.

Beverley Glover who is a botanist at the University of Cambridge says, “The bee has claws on its feet, and it can lock into the gaps between the cells”.

The scientists then decided to simulate the effect of wind by placing the flowers on a shaking platform. The more the platform shook the more the bees were swayed towards the petunia flowers that had conical cells so they could stick to the flower.

Twenty percent of all flower plants can’t produce conical cells. Dr. Glover, one of the scientists involved, next wants to study how bees and other insects react differently to these flowers. Also bees aren’t the only hovering pollinators around and scientists would like to see how hummingbirds and moths are also swayed by these sticky flowers.

When you think of Easter, you most likely imagine a lot of colour and the new life that comes along with spring. Pastel shades of pink, blue, purple and yellow are all popular for this occasion. So, if you are planning on sending Easter flowers to a loved one or if you want fresh décor […]

Non-floral accessories for your fresh arrangements

Whether you want to give your fresh flower arrangement a fabulous new look or a particular theme, there are plenty of non-floral accessories that you can add. For the most part, you only need one of the accessories mentioned below but you can combine some of them if you like. Here are a few ideas. […]