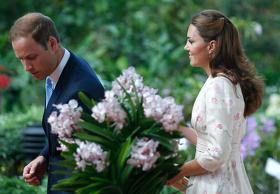 The Duke and Duchess of Cambridge began their tour of the Far East yesterday and were presented with some beautiful flowers whilst in Singapore.

On their first day of the 9 day Diamond Jubilee tour, William and Kate were presented with an orchid named after Williams mother, Diana, Princess of Wales, at the Singapore Botanic Gardens. Diana was due to be officially presented with the orchid, dendrobium memoria Princess Diana, just two weeks after she tragically died in 1997. William called the flower “beautiful” and spoke of how it was a shame that his mother never got to see the flower.

The manager of the gardens, Alan Tan Chye Soon, said “It was so sad that she never saw it. It is one of our favourite orchids, and most popular. We were getting ready for her to come over when she died. It was like William and Kate are fulfilling her promise today,”.

The couple were also presented with an orchid in honour of themselves, the vanda William Catherine, with beautiful white petals and purple spots. The couple were shown around the gardens, which has many flowers named after famous figures such as Nelson Mandela and the Queen, as well as meeting many of the gardeners and scientists who designed the flowers on show.

After their visit to Singapore the Duke and Duchess will be going on to visit Malaysia, the Solomon Islands and Tuvalu.

Fashion and design trends have a way of making a comeback every now and then. Just think of halter tops and wide leg pants. One of the most recent popular trends is the return of vintage. In fact, this trend has been gaining momentum for a couple of years, at least, and is influencing clothing, […]

Black is one of the most popular colours associated with Halloween and many families enjoy decorating their homes for this occasion. Black flowers like black roses are in high demand but they are not necessarily easy to find. When you search for black flowers online, you will notice that a number of images will come […]

How To Keep Your Summer Flower Bouquet Fresh

The summer months can take their toll on everyone.  The heat often leaves us feeling lazy and tired during the day.  Just imagine how your fresh cut flowers must feel.  Removed from their natural environment where they once thrived, and now placed in some container of water.  It’s no wonder they tend to perish all […]